Answers to populism in Europe

Much of the upcoming European election is framed as a battle with populism. With political leaders like Farange, Wilders and Le Pen representing 'the small minded' within Europe, and with Mr. Putin as the big enemy outside, there seems much to be scared about. Votes will be lost to populist parties, in significant numbers. However, a more sober assessment suggests that there is no immediate threat to centre-right and centre-left majorities - yet. Not on the national level, not on the European level. Still, even though polls predict rather comfortable voting results for main parties of EPP (centre-right), S&D (centre-left) and ALDE (liberal), voters are forgiven when they think that the populists will take over the European Parliament and start with the dismantling of Europe. However, the real question should be: is populism destabilizing Europe or are we destabilizing ourselves? In my view the rise of populism is not a sign of the strength of their leaders, but a sign of our own lack of answers to the uncertainty of our voters. Any answer to populism should be an answer to ourselves: what policies do centre parties stand for? What is Europe about? What are we about?

Today we are at the early stages of an election that promises to be a battle of one-liners. As a former campaign manager I cannot argue with that. Clear messages are required if politicians are to reach the voter. The general apathy about Europe is a bad thing, a sign of alienation on which the populist can prey, and I welcome every effort to change that. But in the end this campaign is no more than a loud kitchen debate in a big house with many rooms and too many closed doors.
From this perspective, it would be a mistake to fall into the trap of blaming 'the' politicians for this apathy. Things are going on that are much larger than any party, let alone a single politician, can handle or even address in a campaign. This is about us, as people in a continent in crisis. It is not about the nation state or about the European institutions, even though we may think it is. it is about how we deal all with the changes that are now going through European society. Europe is not about Europe, it is about us. Our endeavors, our ways of creating wealth, our beliefs.

In May 2013 I was asked to give a 10 minute talk about populism and the position of centre-right parties at the anniversary meeting in Budapest of the Robert Schumann Institute. I published my contribution as a blog under the title of 'Europe is not about Europe'. Soon after that, I got a request from another institute to talk on the same topic, this time for an hour at a small but dedicated event in Vilnius for representatives from Baltic and Central European states. Perhaps because of our wild experiences with Wilders, the largest delegation consisted out of three Dutch lectures, of which I was one. Here you find my text, written after the event, based on my notes. It is partly updated to today, though there is no changing the fact that the economic crisis was much more felt in the summer of 2013 than in this spring of 2014. I publish it now, because a month back I was interviewed by Alexandra Kaniewski, a journalist from the Gazette Wyborcza, the biggest daily in Poland, and she told me she wanted to have it published. It made me finish the text, also because she said some nice things about it. Thank you, Alexandra. I know it is quite long, but some things take time to be written and to be read. 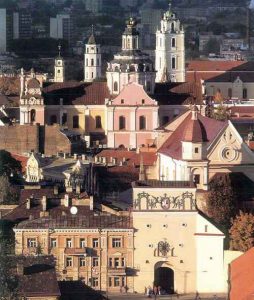