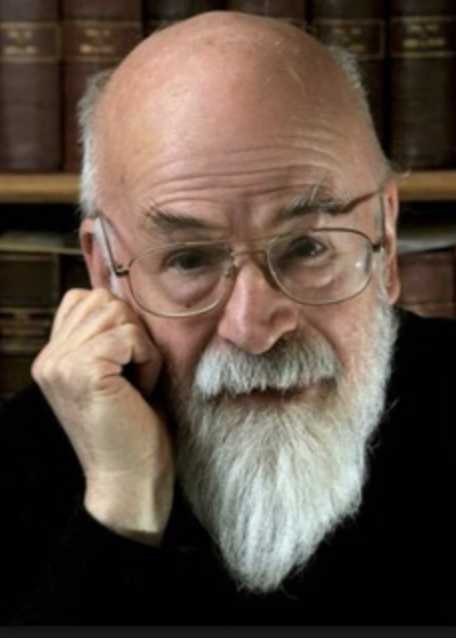 Pratchett, Sacks, and the science of mild madness 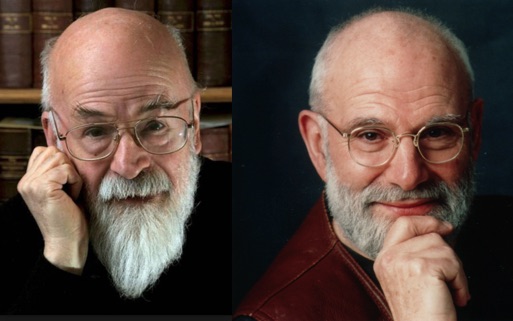 At some gatherings of parties or associations, the general meeting starts with the chairman asking for silence and then calling out the name of Mr. X or Mrs Y. Mr X having done this and this, Mrs Y having achieved that and that, ending the summation saying ‘in them we commemorate all others who have passed away in the same period.’ I have always found this both a most practical and exemplary way of dealing with loss within a large group.

And then someone comes along and writes something that makes me realise how much each chairman comes up short by not doing a laudation of everyone that passed away. Today Oliver Sacks past away. A few weeks before his death, he wrote this in The New York Times: 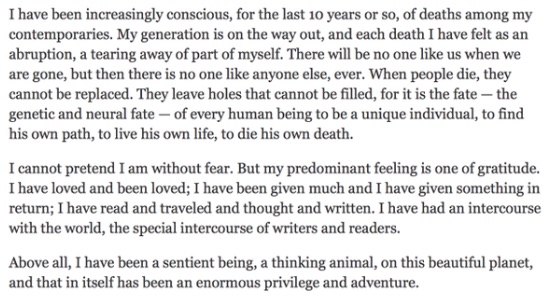 I guess it takes a man truly unique to point out how unique we all are. Even, or especially, when we are not ‘right in our mind’, and mistake our wife for a hat. The wonderful Mr Sacks showed us the working of our brain through his stories. Showing us at the same time that we are more than our brain, more than the sickness of that brain. Probably that is because at various times his brain was not that fine either. I have read ‘Mr. Tungsten’, the story of his youth, and it was in many ways more endearing and more heart breaking than the stories about his patients. Only last Thursday I bought his second biography, reading enough to understand that he had gone through drug use, long periods of counselling and severe depression. Still, that does not make him more or less than his patients, except for the idea that he probably understood them better than others would. What distinguishes Oliver Sacks is both the precision and the mildness with which he observed the madness, doing so in such a way that causes were clearly exposed without destroying the personalities. Loving them, actualy. It made you understand, it made you think.

Oliver Sacks is one of only two writers that have had a physical and disturbing impact on my marriage. I hold Sacks personally responsible for kicks in the ribs by, depending who is reading him, either my wife or myself, saying “you should hear this!”, and then proceeding with Sacks case history with or without consent from the partner. Very irritating when you yourself are in the middle of another book. It can come to blows.

The other writer is Terry Pratchett. His influence is more subtle, but no less disturbing. Imagine one of us reading a book by him, and then suddenly tremors start to ensue from the couch where both of us are sitting. More and more tremors occur, and then laughter comes up like gas from the couch, rearranging the cushions underneath like tectonic plates after an earthquake in Groningen. Of course you stop whatever you are doing, but your partner has his or her eyes glued to the book. Then more tremors rock the couch. That is Pratchett for you.

Both are what I would like to call ‘scientists of mild madness’. They use stories, sillyness and absurd images and inversions to make your thoughts run wild. They use the madness they see and the madness that is within themselves, to make you see differently, but in a mild way, engaging your intellect as much as your emotions. They are not geniuses like Einstein, though Albert was only a genius as long as he was a storyteller like them. He lost his brilliance when he became Einstein and chose maths as his means of communication. But Einstein was a non-conformist like true geniuses are, and both Sacks and Pratchett are true community builders. Brilliant they are, but do not ask them for breakthroughs. They wonder, they connect, they find, they tell, reflect and turn things on their head; that is what they do. Scientists they are though, although both would suffer the trauma of not being recognised as such.

Oliver Sacks was criticised by his colleague psychiatrists. His approach would be too romantic, to nice. More seriously were their objections to his intrusions of patient’s privacy. They had a point there, even though all patients gave permission. But in terms of the progress of the brain, science, I think his approach of mild madness did wonders.
This week a publication showed that most psychiatric studies cannot be reproduced. Somehow I am not surprised. I do not think standard scientific methods get you very far outside an MRI to help you. Another study I found more interesting, even though again I was not very surprised: there are more than 6400 psychiatric studies into the causes and effects of fear and only 167 on the effects of laughter. I guess Sacks is not one of the authors of one of those studies on laughter, but I think it is extremely important that he made us laugh, cry and think in a wondering, humorous way about the way our brain functions, dysfunctions and somehow knows how to find ways around our dysfunctioning brain. If that is not the way towards science, what is?

Terry Pratchett is, among many other things, also the author of four books that popularises the findings of modern science, under the title of the ‘Unseen Academicals’. They are not his best books, perhaps because he co-authored them with two scientists of true renown. While reading them, I somehow am always waiting for the moment when I recognise Pratchett’s writing, because only then something gets turned upside down in my head.

He does not need to be legitimised by writing this way. At least, that is to say, to me. I understand that the hallmark of a good scientist is to appear in a lot of footnotes. Great, but I know that the only footnotes I ever read are 1) the ones I am in myself, 2) the ones I write myself and – most eagerly of all - 3) Terry Pratchett’s footnotes in the Discworld novels. They really are the best part of his book. Counting those, he is the greatest scientist ever.

Last Thursday we had the posthumous publication of his last book, a few months after his death. Fittingly it was a novel about the girl Tiffany Aching. Perhaps I like the books about her the most. Because they can be irreverent, funny, wise and achingly sad - all at the same time. They celebrate mild madness – and in this case a victory over Alzheimer, as the book was written in collaboration with his daughter while the brain disease made it impossible for him to type or remember most of his own writing. What a way to go.

I like the science of mild madness. Not because it is truly scientific – tell me, what outside the domain of the natural sciences truly is? – but because it shows you the kind of thinking that creates science. Deification, reification, validation; all of it is important, but in the end it only legitimises scientific knowledge and does not create it. I salute two mad hatters that more than a great many others made me smile, wonder, cry and THINK. Thank God (even though he does not exist according to both) for mild madness.

PS Oliver Saks gave us a video of a flash mob performing Beethoven’s ‘Ode to Joy’ in his last tweet. Beethoven: another one just like him. Enjoy and be thankful for mild madness.